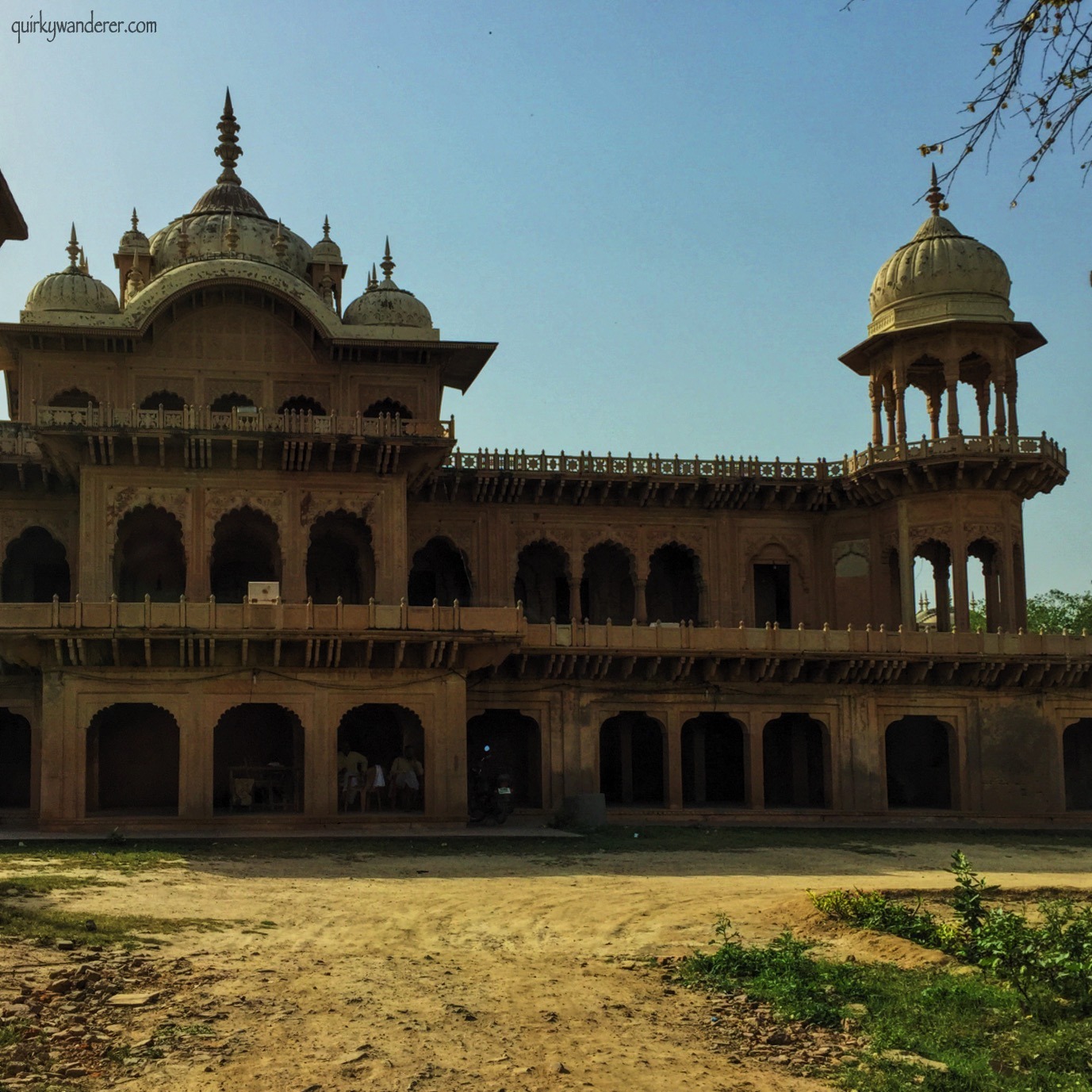 The rickshaw waala peddles through the old lanes of Radha Kund as I click pictures of the old, dilapidated yet fascinating doors and shutters of closed shops.
He doesn’t seem to fathom why I get all excited whenever I see an old heritage building and wonders why would a rusty door interest me.

Suddenly we pass by a magnificent piece of architecture: with huge minarets, standing tall against the morning sun.

I ask him to stop so I can click and strangely he doesn’t oblige but peddles faster. Its weird, but I guess he is in a hurry.
Looking out for a landmark near this building, I make a mental note to visit it again for photography.

I am in Goverdhan, a small, religious town having strong mythological connections.
Nestled between Rajasthan and Uttar Pradesh, this village bustles with activity during Hindu festivals and days of religious relevance, namely Ekadashi and full moon days.
The highlight is the Goverdhan Parikrama. Read about it here.

What intrigues me is the rich architecture scattered across in bits and parts, living stories of yesteryears. Most of them unprotected, unnamed, unvalued.

In my conversations with locals, I often get these answers to my never ending questions:
“That building? No one goes there!”
“I don’t know how old it is, for us its always been a play area.”
For every other question Krishna is an answer. Inevitably everything is linked to Lord Krishna, some of them, extremely entertaining and visibly fictional.

The same day I saw the building with minarets, later in the evening, a local asks me if I would like to see Rudraksh trees?

I sit up, bewildered. Rudraksh trees cannot possibly be found in such an arid climate. That is why they are found amply in Nepal and Rishikesh.
My curiosity leads me to accompany him.

My jaw drops when he enters the gate of the minarets I saw in the morning. Coincidence much?

I sprint inside out of sheer excitement.

The courtyard is deserted, with just one watchman in sight. The first thing that caught my attention were the beautifully constructed cenotaphs (chattris).

A rusted board reads that this is a protected monument.

I walk past deserted corridors observing the intricate stone work, curious as to what could possibly be the story behind this ancient building.

I ask the watchman, to which he prompt replies, “Yahan to Shamshaan tha” (This was a crematorium). I freeze.
Sensing my shock and my sudden movement towards the gate, he is quick to add, ‘of the Kings of Bharatpur’. Now the board makes sense, the place is called ‘Bharatpur Rajaon ki chattri’.

Chattri or cenotaph is a memorial built for the dead royal family members. These intricately carved cenotaphs are built in stone or marble and are a quintessential part of the Jat, Rajput and Mughal architecture.

Plenty of such chatters are found across Rajasthan, Madhya Pradesh, Uttar Pradesh and Delhi.

The local urges me to not go back. I wouldn’t of course. Not after seeing such ornately done doors.

We are walking around the main structure, when sounds of a shiv bhajan echo in the complex. There is no one in sight.

The watchman leads us to a descending flight of stairs.

The cenotaphs are no more in sight. All I can see are trees. Scores and scores of trees.

Ambushed between the green cover was a small shiva temple. Quite unusual, but there wasn’t any offering on the Shivling. The song being played was a treat not only to the ears but also the soul. A magnetic voice, almost addictive.

I have never heard this song before. But I feel I have visited this place before. As I am ruminating over this Deja Vu experience, I see Koyals strutting in and out of the foliage.
It is impossible to think that this was once a cremation ground. Parrots swung on branches while peacocks played hide and seek.

No there wasn’t an iota of negativity here. Some places that fill your soul with a terrific energy and positive vibes.

We are now facing a whitewashed vintage bungalow.

I am ushered in a drawing room filled with foreigners. It is a casual seating arrangement. A tall, well built Yogi is answering their questions. Questions pertaining to existence, subconscious being, Kriya Yoga, Kundalini meditation practices. The radiant Yogi answers every query in impeccable English with ease. I have a eerie feeling that he knows I am studying his face keenly.

I need some time to let all of this set in. The bizarre set of events: Finding the Chattris, wanting to click them, learning about the cremation grounds, visiting the Shiv temple, soaking in the greenery and now being face to face with a Yogi. (I will not name him as I didn’t seek his permission to reveal his identity) . He hands over two books that he has authored and reveals that he has never stepped out of the compound since 8 years.

Whether one believes in a particular Yogi or his teachings is one thing and that one meeting wasn’t enough to help me decide. But I knew one thing for certain.
This man had transformed a barren cremation ground into a lush, green paradise.

A forgotten piece of land where birds of prey flocked is now home to peacocks and parrots.
For this transformation and his dedicated effort, I held him in utmost respect.

The last king of Bharatpur had handed over the property to the Yogi who was then studying law, but was on the lookout of a guru who would teach him Kriya Yoga. After the last king was cremated, this ‘shamshaan’ was worked upon and the fruits of his handwork were clearly visible.

While exiting, I finally get to see the row of Rudraksh trees. The best of my scientific knowledge goes for a toss as I try to fathom how is it possible?
I give up. Some mysteries are best unresolved.

I turn behind one last time and look at the cenotaphs through the gate. Our country has so many stories hidden in every nook and corner. We only need to delve a little deeper.

There are some experiences which are out worldly. Where words cannot do justice to the experience. They reside in you for a long, long time and give you goosebumps whenever you think of them.

Its been over a year I visited ‘Bharatpur Rajaon ki Chattri’, but the experience is still fresh in my mind. Like the song I heard in the complex, whose lyrics I have forgotten but the tune stills lingers on in my mind.