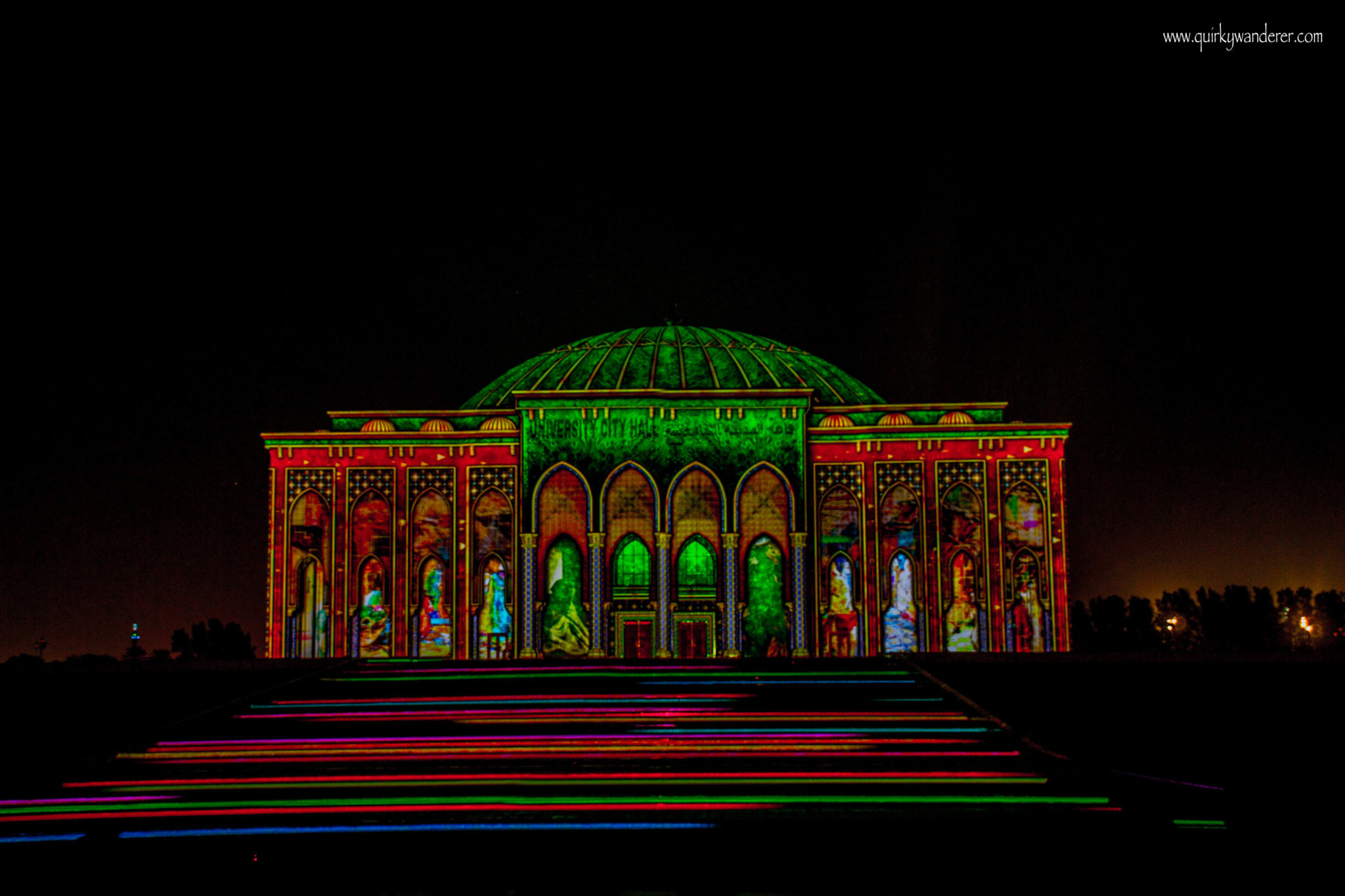 It was nearing dusk and the Al Noor mosque in Sharjah was steadily being filled with people.

The sounds of the evening Namaaz filled the air and the waters of the Corniche gleamed as the sun set behind the Sharjah skyline.

As the day slowly gave in to the night, a few lights flickered over the mosque. Imran & me readied our tripods and fifteen minutes later, the magic had begun.

The mosque dazzled with colours. Gorgeous patterns danced over the minarets and lit up the otherwise beige coloured building.

Crowds now began to stop and watch the show.

An array of contrasting colours were splashed and taking photographs was extremely challenging yet enjoyable.

In the middle of a city with modern infrastructure, here was a little display that took you back in time.

Cars whizzed by, people walked, city lights gleamed, but this sneak peek into the Sharjah light festival stole my heart.

The Sharjah Light Festival is organised annually since 2011 and this was the 7th edition of the festival. This highly acclaimed and popular festival lights up designated locations across the Emirate in a spectacular way.

The festival kicked off on 2nd February and will be on till the 11th of this month. Shows will be held daily in the evening, except during the prayer times.

Creative techniques are used to create a light and music experience for the audience and buildings are used as a background for visual storytelling.

So what looks like a white building in the day, transforms into a colourful mosaic at night. Arabic and modern 3D graphics are displayed showcasing how culturally rich yet modern Sharjah is.

The next night I patiently wait with many others, at the University city of Sharjah,in the biting cold weather to witness the live show. Set up the tripod, adjust the camera and watch the excited faces of kids adorning 3D glasses. But the weather God has other plans. It starts to rain and then pour and a wave of disappointment swept over me.

I look at the University city and wonder how the lights would look on it, while Mozhgan, our guide rightly says : “Maybe we needed the rain more today”.

Adamant to click, I walk across the corniche to capture Noor mosque again. It left me awestruck again, with its bright patterns and the abundance of pink and purple.

Al Taqwa mosque is about 500 metres away and slowly, Indrani and me trudge along the waterfront to reach and click it.

It revelled in its majestic glory, the patterns of a different kind.

Tired, I think of returning. But then every time I turned to dismantle my tripod, another burst of colours tempted me.

“When next will I see a show like this?” I ask myself. Tiredness takes a backseat and the camera is mounted once again.

The next day I scroll through Instagram pictures of the University location and I am stunned. So the show did happen and people did capture the glory in their cameras.

I lament how happy I would be just to see it with my eyes if I got the chance again. But then time was ticking and there were so many locations to see. Al Qasba, the show at Al Majaz and of course the live parade.

At dusk, the guide announces we are off to the university city. My heart skips a beat. So we are going to see it after all!

People begin to pour in, sitting on the steps, adorning 3D glasses. The show begins and my mind cannot register what to do first.

It’s a whirlpool of graphics enfolding one after the other.

Birds fluttered in gardens, waves gushed through the stairs, colours danced on the canvas and mystical creatures flew across as the show enthralled and entertained.

One cannot help but marvel at the creativity of the illuminations and the music in sync with the lights to create a dramatic experience.

Traditional arabic designs and scientific 3D graphics painted the University building in myriad hues as the audience was left clapping and eager to see more.

At a point, my fingers freeze as the graphics pull me into “The” moment. It was in this moment, I blessed the visualiser of the show. For his/her sheer brilliance in converting a blank canvas into a story of his imagination.

“You can wait inside the restaurant”, announced our guide, but some of us didn’t budge.

The show was about to begin and none of us wanted to miss it. We stood patiently in front of the sparkling Al Majaz water front.

The patience bore fruit (read : fountains). Gushing dancing fountains lit up the skyline with different hues spraying in all directions.

The fountains danced with music and the show sent a cheer wave among the kids.

And now I couldn’t wait to see what Al Qasba had in store.

The place was brimming with activity even at 10.30 at night. A giant ferry wheel, lots of eateries, amusement centres for kids and of course : LIGHTS.

Fireworks set off on the walls, illuminating the buildings, spoiling us for choice. I now wished I had two eyes at the back too, so I could see what was happening on the wall behind me.

Gorgeous windows shimmered in the dark, a camel trotted in and across and arabic music filled the air.

I stood for a long time on the bridge, savouring the moment. Watching the lights, all the activity, the festivities soaking in.

Arabian nights had just come alive and how.

I was invited by Sharjah Tourism authority and Air Arabia to witness this spectacular light festival. If you haven’t seen it yet, I suggest you put it on your travel bucket list.

Here’s a video shot by me and edited by Wajid:

32 thoughts on “Sharjah Festival Of Lights: UAE’s own Arabian nights”