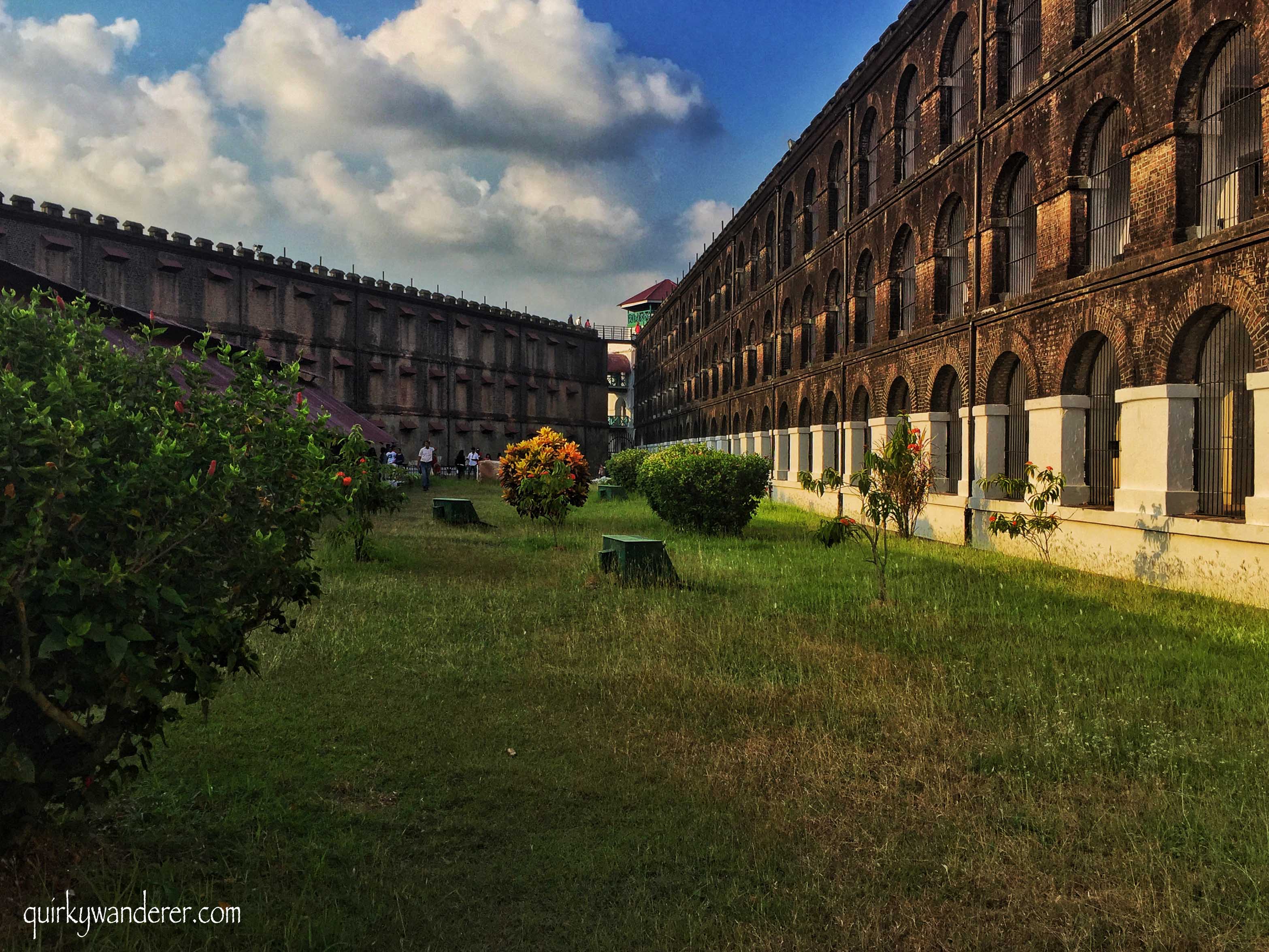 I am dreading this visit to the Cellular jail in Andamans.

I had been dreading it since weeks before visiting it.

The thought of visiting a place where thousands of Indian freedom fighters faced atrocities of the British wasn’t a pleasant thought.

I knew it would be a tough visit. What was I scared of?

Not being able to face the reality of the place? Or the fear of breaking down in public?

I am standing right outside the freshly painted yellow building with green windows, with the Indian Flag fluttering at the entrance.

Walking towards it, with the same dread in my heart, I enter it to see a quote of Veer Savarkar hung on the walls.

[“This is a pilgrimage, do not call it Kaala Pani,

Tales of sacrifice will reek in every quarter of this land.”]

And then I see the buildings. The rows of cells looming at a distance, built in a way that the British jailors could isolate each political prisoner and they would never be able to communicate with each other. A massive Peepul tree stands overlooking the gardens and the grounds, as if witness to it’s past.

The guide asks us to first visit the orientation centre to get acquainted with the history of the place before touring it.

To find a suitable site for the prison was a task for the Britishers who finally selected Port Blair in Andamans as it was just opposite Ross Island, which already had troops on it. Also, because there was no escape at all for the prisoners, as the walls were bounded by the sea.

The construction started in October 1896 and completed in 1906 at an estimated cost of Rs.5 lakh. The irony was that armies of Indian prisoners were deployed to construct this monstrous edifice built to strike terror in the hearts of their very own countrymen.

The prison was constructed in a star shape. With the watch tower in the centre and all the seven arms like spokes of a bicycle wheel. Each arm faced the rear of the opposite arm and so none could witness what conspired in the opposite arm.

The term ‘Kaala paani’ was used as a reference to the Sanskrit word Kal meaning time/ death. Hence Kaala paani inferred to water of death or place of death. A sentence to ‘Kaala Paani’ implied throwing the freedom fighters in living hell to face unheard trials and brutalities of the British and to lead a life worse than death.

The Indian freedom fighters instead immortalised the place with their sacrifices and undying spirit, making Kaala Paani a sacred place.

I continue to read the horrors of the jail as described by some of the freedom fighters: From flogging to physical and mental torture, the words choked me.

Ten minutes later, I sit outside in the grounds, reflecting on what I read inside, in silence. Crowds throng inside, mostly Indians, a large percentage being newly married couples who have chosen Andamans as their honeymoon destination.

My chain of thoughts breaks as I see them choosing this place to strike poses for ‘selfies’ and meaningless banter. A place like this deserves at least some iota of respect and decorum.

The least we can do for these brave souls is to respect their sacrifices by not behaving like morons at the place where they laid down their lives for US.

As we start touring the grounds, the first place is the gallows. Extremely upsetting to see that it was right next to the dining room, where the freedom fighters could hear the last cries of the one at the gallows.

Oil grinding was the most difficult task allotted to the political prisoners of the Cellular jail. This also caused death of some and insanity of many.

The daily quota was to produce 30 pounds of coconut oil and ten pounds of mustard oil, which even animals couldn’t do. And if they failed to do it, they would be flogged and punished with unhygienic diet, leg irons and chains, neck chains and solitary confinement. Right in the centre was a board where the British jailors would tie the fighter with chains and flog him if he did not complete these extremely unreasonable tasks.

Water wasn’t provided. If the prisoners felt thirsty and asked for water, they would be abused and beaten mercilessly.

I try to fight back my tears while passing the dummy oil grinding arena, trying to picturize the barbarism of the British jailors.

It is now time to enter the building housing the cells.

As I walk through the passages of cells in the Cellular jail, an eerie feeling enveloping me. The chatter of the crowds dies and everything dissolves. Even the voice of the guide.

Here lived people who died for a better future for us. Who revolted, who fought, who went through hell so we could live a life of freedom and dignity.

In these very cells, they continued their struggle for survival, just with ONE dream: to see India free from British rule. They faced isolation, abusive torture, lack of food and worse lack of respect all in the bleak hope that their country would be free one day.

The Britishers could crush their bodies, but not their spirit.

Stories of yesteryears unnerved me. If I can’t even hear it, I can’t even finish reading it in the gallery of the Cellular jail, thinking of someone undergoing it is beyond imagination.

Reading it was one thing. Seeing the gallows, walking past the flogging square, makes your heart wrench.

These were political prisoners and their crimes weren’t the likes of the heinous crimes committed today.

The corridors are silent, cells are empty. Honeymooners have vacated the place finally and I can get some solitary sane shots.

In the silence, a wave of breeze hits and leaves tremble a little, I notice the flowers dance.

They are watching how each one of us breathes in free air and slavery is a forgotten thing.

If you are an Indian, Cellular Jail is a MUST visit. If you do not have time for the sound and light show, at least make a point to tour the place as an ode to the martyrs who laid their lives. When you visit  Andamans, DO NOT miss out on this place.

I am glad I conquered my dread and visited it. The place fills your heart with emotions that reading about it will never do.

Suggested read: For the love of Andamans

Cellular jail is in Port Blair and is a ticketed monument near the Aberdeen jetty.

It is best to hire a guide who can take you around the place in one hour.

22 thoughts on “Why visiting the Cellular jail is a must for every Indian?”