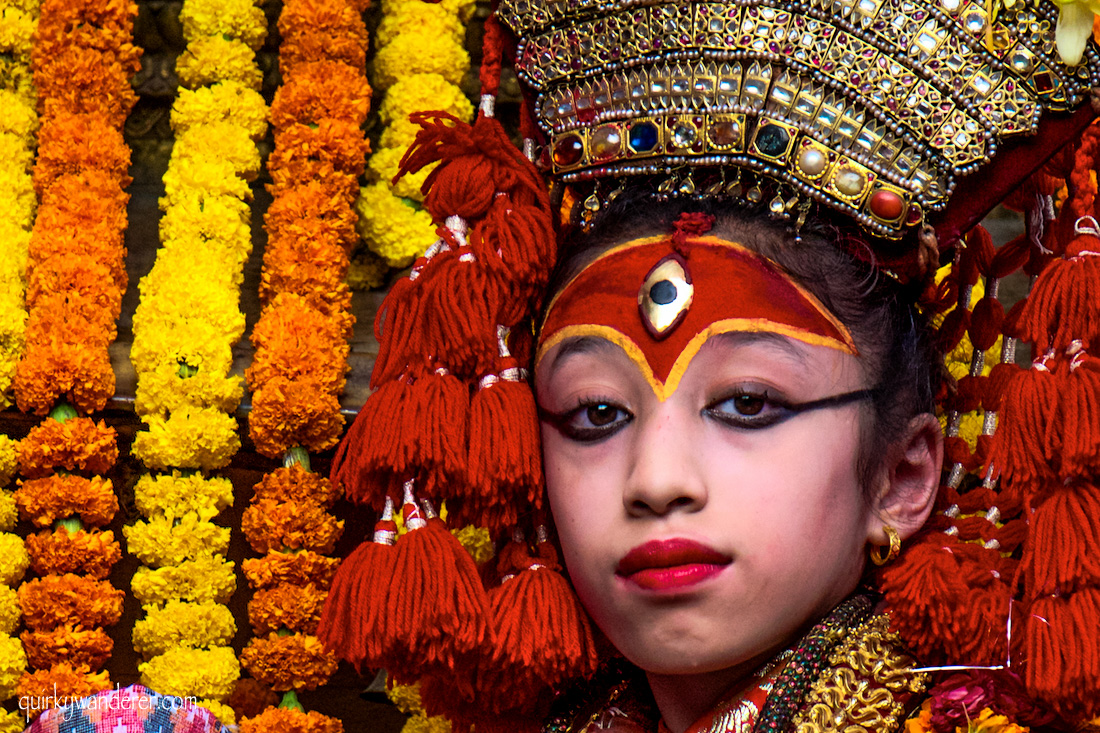 The sounds of drum rolls reverberated through the Durbar square in Kathmandu as lakhs thronged to see the Kumari in her chariot. It was that time of the year, where the city came alive with the infectious energy of the Indra Jatra. 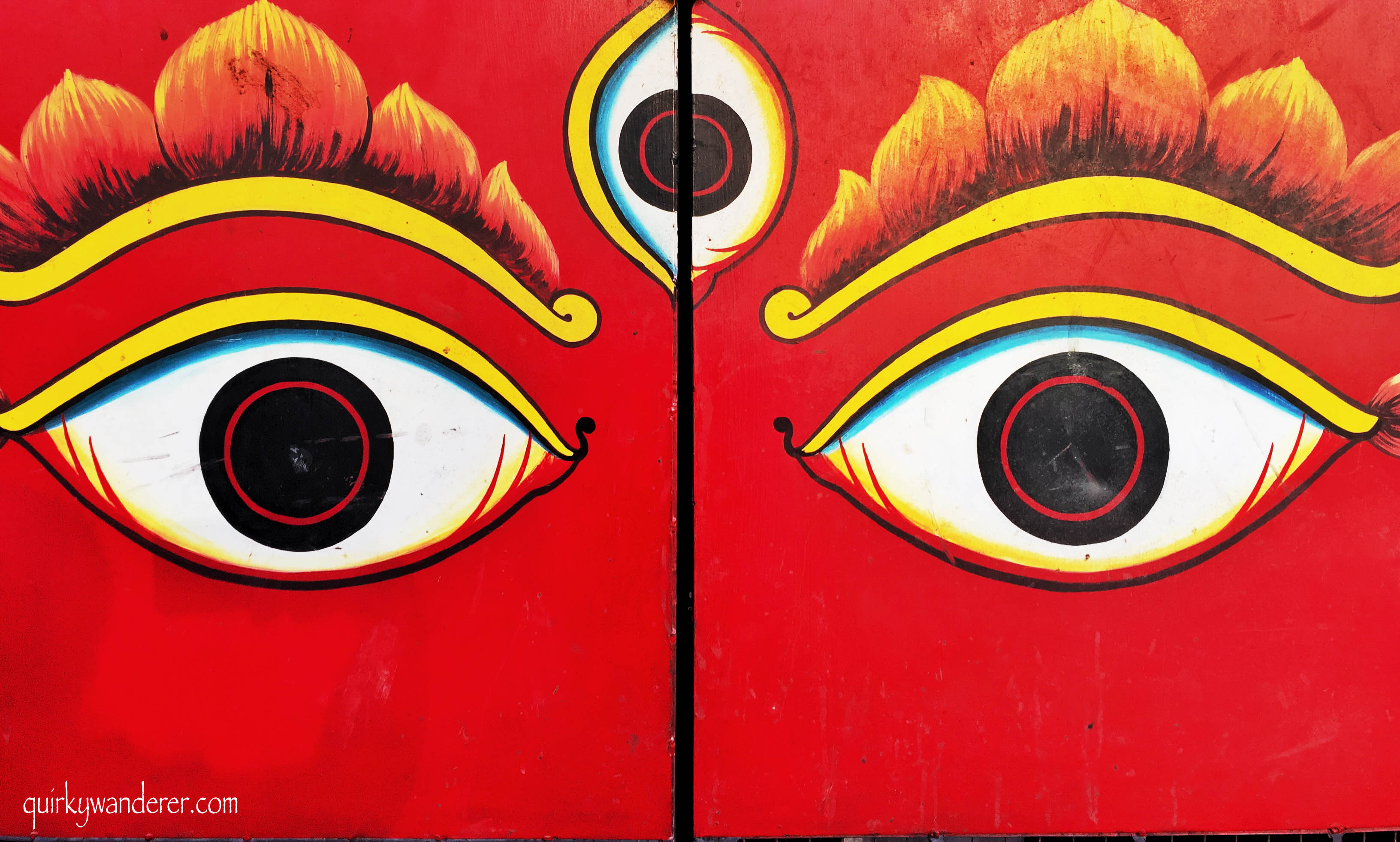 I feel a little lost. People perched on top of buildings, peeping out of crowded cafe windows and some precariously balancing themselves on edges of terraces. While this was the aerial view, the ground realities were a little different.

Groups of young boys and girls dressed in all finery, paraded through the crowds, making the atmosphere nothing short of a carnival.

There was action everywhere. Masked dancers known as Lakhay walked through the crowds, drummers blended in and men in white robes glided in and out.

Come September and Kathmandu gears up to celebrate the Indra Jatra, a street festival where the living goddess of Kathmandu known as the Kumari is worshipped and she is brought out in a chariot to bless the crowds.

Even a glimpse of her is said to bring good fortune, as she is rarely seen and lives an isolated life inside the ‘Kumari Ghar ‘.

The Kumari tradition in Nepal:

The tradition spans over centuries, where young girls are selected after a rigorous procedure ( 32 tests of perfection) from the Newari community and once selected, the living goddess takes the role of a Kumari till she attains puberty. After which, the girl returns to the ordinary life. She is believed to be a reincarnation of the Hindu goddess Durga and people believe she has a power inside her, as the goddess Taleju Bhawani  has entered her soul. The chosen Kumari is worshipped by both Buddhists and Hindus.

We climb up the stairs of the Kumari Ghar ‘residence of the Present Kumari’ to see the current Kumari, 11 years old, Manita Shakya, before the Chariot processions begin in the city. Manita has been a Kumari since she was 3 and photographing her inside the Kumari Ghar is strictly prohibited. We join the line of devotees with offerings and finally get to see her. Clad in vibrant red and gold, she sits cross legged. There is a certain aura around her.

She doesn’t emote. Her face devoid of expressions. This isn’t what I imagined in my head, before I left for Nepal, to be honest. I had pictured the young goddess as a giggly, little girl. But as I bend down and bow down to this little princess, I feel an unimaginable power around her.

I cannot help but notice her delicate feet, almost cotton like, smeared with vermillion.

I never imagined I would be meeting a living Goddess in my life. It was a very private affair and even though there weren’t any emotions or expressions, it felt different, very very different.

I am now standing in front of the decorated chariots, with vibrant hues of red and gold. The volunteers are gearing up for the procession and so is the local police. The Durbar square and the area around the Kumari Ghar  is brimming with activity. All waiting for a glimpse of the Kumari in her chariot.

As the crowds swell, the excitement levels sky rocket. While one part of me hunts for the comfort of a vantage point, another part wants to plunge into the crowds for close shots.

While I debate, there is an outcry. Bhairav (one of the gods in the procession) arrives in a palanquin. I see a hint of mischief in his eyes, like he is happy to revel in the glory, as he is whisked away on the shoulders into the Kumari Ghar.

The wait is almost over. In another hour, the three chariots would leave after gun shots are fired in the air.

They are brought out one after the other. First the Hindu god Ganesh, then Bhairav, a manifestation of Lord Shiva and then Kumari, the living Goddess. Ladies rush with offerings and garlands as they are taken to their respective chariots by their caretakers.

It is faith, royalty, celebration and zest all coupled into one moment as the crowd breaks into a cheer when they see the Kumari lifted by her caretaker Gautam Shakya and made to sit in the chariot.

I snap the moment only to realise that this is indeed the time to run. The chariots would move any moment and so would the crowds. The chariot of the Kumari is slated to stop infront of the huge Bhairav mask and as soon as the Kumari greets the image, beer begins to flow out of the mask and locals believe it is good fortune to get a sip of this!

Mr. Sagar’s (Owner of The Dwarika Chenn Hotel) words echo in my mind. “The chariots will stop outside the hotel”.

I know where to head next. 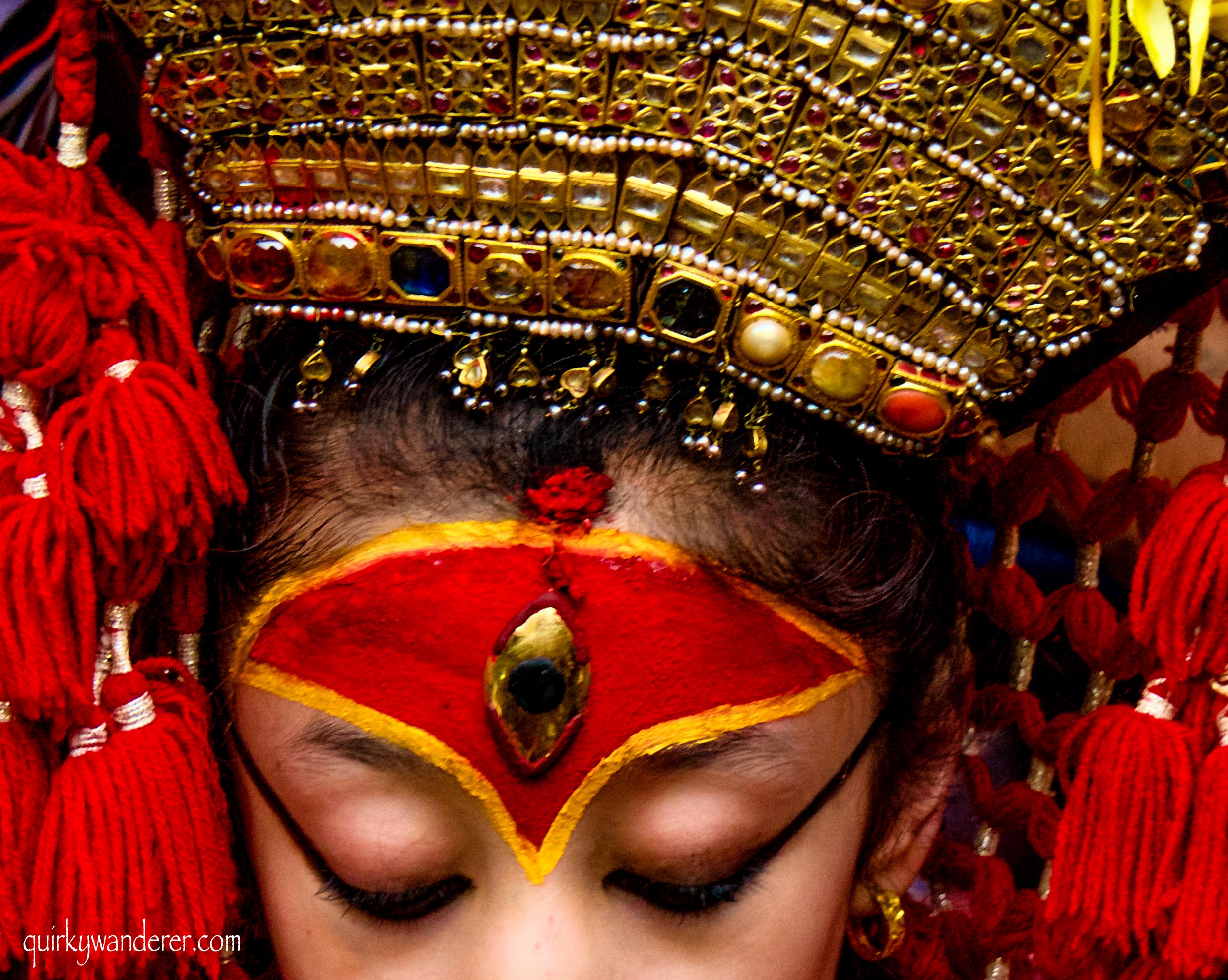 It isn’t easy being a Kumari. The young Kumari is not allowed to step out except on special occasions and festivals and cannot talk to anyone apart from their parents and family members. She is brought up in an protective environment where her tutors come home for her lessons. They are mostly carried around everywhere by their caretakers, as their feet should never touch the ground, hence most Kumaris find it a hurdle to walk once they return to normal life.

As I reach Dwarika Chhen, Mr. Sagar’s grin welcomes me. He asks me to hurry as I scramble up to a point where we can see all the action without any hurdle.

I stand trying to calm myself despite all the chaos around me, letting the festivities wash over me. The chariots approach, one after the other. I wait with bated breath like something magical is still left. The chariot with Ganesh is about to pass followed by Bhairav’s, living gods played by young boys : Sambeg Shakya and Rojan Shakya.

The mischievous Ganesh sits playfully in his chariot. I focus my lens on him and he turns. Looks at me straight in my eye and I gasp. The eyes say it all.

I frame it. Not just in my camera but in my heart.

The tradition of Living gods may or may not be believed by all , but there is no denying the fact that every little child in this universe has the divinity to melt hearts. Like this one just did.

The Indra Jatra is an 8 day long festival celebrated by the Newari caste in Kathmandu. The festive kickstart in the Basantapur square with the erection of a wooden pole known as the ‘Lingam’ which bears the flag of Indra, the Hindu God of Rain. 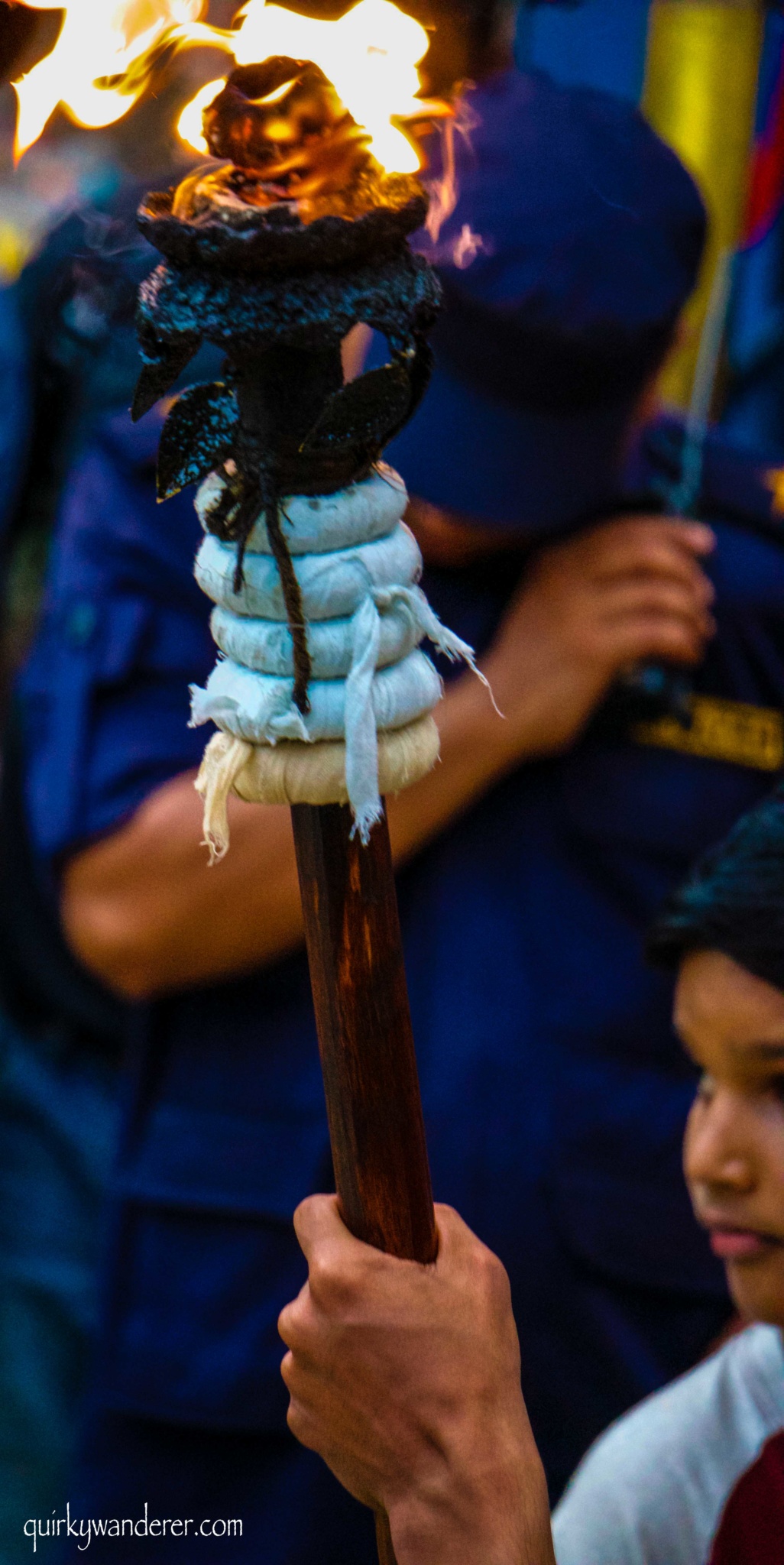 All throughout the 8 days, the main square and the streets come alive with celebrations. There are enactments of the Dasha Avtar and temple brimming with people.

In the evening there is the main chariot procession that begins with the Kumari Ghar, where three chariots are taken to different parts of Kathmandu.

It is best to stay in the middle of all the action to see the festivities up close. The best place to stay is Dwarika Chhen Welcome heritage Hotel which is at a 2 minute walking distance from the Kumari Ghar.

Make sure you keep ample days for sightseeing in Kathmandu when you come for the Kumari Festival as there are ample  places to visit in Kathmandu.

Make sure you are aware of the route and the timings, so you do not miss the key events. Locals are helpful and will guide you to vantage points.  Do a recce of the place before the actual festival. It is best to do a tour of the Temples of Nepal before or after or during the Kumari festival or Indra Jatra.

Must visit places near Kathmandu are Patan Durbar Square and Bhaktapur. It is advisable that you visit both these when you visit Nepal for the Indra Jatra!

It is easier to snap the Living Gods: Bhairav and Ganesh . So do not miss out on these! 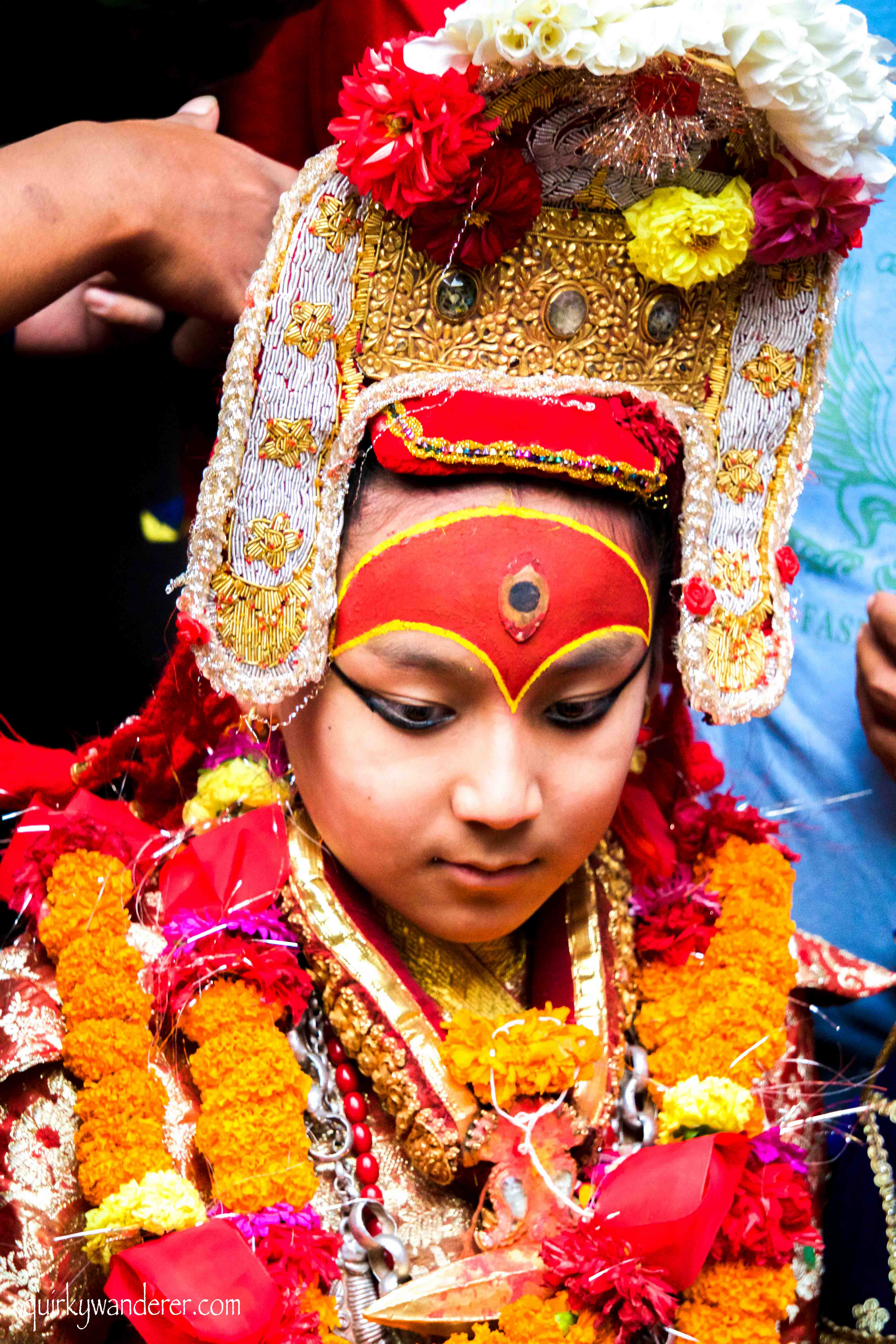 Wear comfortable shoes that help you run and that you are ready to sacrifice! 🙂

Note: I was invited by the Nepal Tourism Board to witness the Kumari Festival held in Kathmandu from September 4 onwards, this year.

65 thoughts on “Kumari festival of Nepal : worshipping the living goddess”