When I ticked Italy off my bucket list, I was nothing short of elated. It was a country I dreamt of visiting as a kid. For the love of Pizzas and pastas, the excitement of unraveling the mysteries of the Vatican (courtesy : Dan Brown’s Angels and Demons) , the longing of exploring the infinite blue at Capri with its mystic sea caves and the delight of vacationing in one of the many luxury homes in Italy amidst the idyllic countryside, with cobbled streets and flowerbeds outside my window.
Another reason to visit Italy was Pompeii.

In grade 5, I wanted to be an archaeologist, fascinated by the ruins, of lost civilisations, of the lore of yesteryears.
So a visit to Pompeii was a given, when I planned my Italy visit. It is a UNESCO world heritage site and why not!
Imagine a city frozen in ash of a volcano. The story of Pompeii is both intriguing and mysterious.

People watched gladiator fights and chariot races in the giant amphitheatre which hosted 20,000 people and enjoyed shows in the classic theatre. There was no electricity so chores were done according to the ‘Rhythms of the sun’.

Water was often collected from public fountains and as the day progressed the town came alive with conversations in market places and meet ups at barber shops and the Forum.

To seek shelter from the scorching sun, I enter one of the bricked buildings. A small tunnel leading me to a dark, dusty room. Here were the thermal baths.

Sunlight floods into the room through a window, the only source of light in the damp room, revealing the rusty baths where citizens of Pompeii bathed.

That fateful day in 79 AD: It was a usual summer afternoon in ancient Pompeii. Mount Vesuvius loomed over the city as people went about their daily chores. There was a deafening roar and the cobbled ground shook violently. The citizens of Pompeii screamed as they saw the massive volcano erupt. Everything was pell mell as they ran for cover. But nature had other plans.

The volcano erupted and spewed smoke, ash and toxic gases twenty miles into the air and this soon spread to the town. The ash kept raining and the skies turned black. People couldn’t even see the sun. Piles of ash kept accumulating on homes, blocking doors and caving in the ceilings. The ash traveling at about 180 miles per hour, burnt everything that came its way.
By next morning, the bustling city of Pompeii was under ash and rock. The entire city with all its inhabitants froze in time. After all the screams, all that remained was deafening silence.

Here I try to picturise the ancient Romans going about their daily tasks before the volcano erupted. Haggling over fresh meat produce and vendors trying their best to woo prospective customers.

What remained now were slabs of rocks and an eerie silence looming in, punctuated with the guide’s commentary.

Rediscovery:
The city was lost in time till 1748, when a surveying engineer’s chance excavations led to it’s discovery. While the molten ash and the rock buried Pompeii, it also helped preserve it. According to National geographic, “Pompeii is the longest excavated archaeological site in the world”.

The discovery of the ruins led historians to discovering the life of Ancient Romans better than any other site as it was one of the most well preserved sites under the layers of ash.
Archaeologists found indentations in the ground that they were able to fill with plaster moulds to exactly match what was originally there.

Current scenario:
Pompeii is an archeological site that still has ongoing excavations, giving visitors the best look there is on ancient Roman life. The House of Vetti (currently under renovation) is an example of a how a wealthy man lived in ancient Pompeii.

There is a concern among archaeologists though, who will preserve what the ash has preserved and man has unearthed?
The excavations need to be preserved and though the government is trying its best, pollution, weather conditions and ongoing tourist activity are deterrents.

Tourists throng the erstwhile bakeries , ancient roman homes and the local brothel with the ‘ Umberto was here’ kind graffitis, while I try to decipher these life sized frescos which seem to be advertisements.

I am peering through the grill into what looks like a shed full of ancient artefacts. Pots, pans, vases and mud vessels stacked on shelves : all a result of ongoing excavations in Pompeii.

The two hours I am in Pompeii, I have travelled back in time: akin to using a time machine and traveling back to 70 AD.
While tourists saunter by the Forum with its looming columns, I pause and go back to the lost era where this very Forum served as ancient Pompeii’s main Piazza which led to other sights.

Explorations on foot led me to the ruins of the second century Basilica and the Temple of Jupiter (Tempio di Giove) which only has one triumphal arch remaining.

It is deeply saddening yet so intriguing that a city could be so well preserved by the same nature’s fury that destroyed it in the first place.

As I slowly turn to exit this lost city and get ready to jump back to the present era, a light breeze ruffles my hair. I am eyeing the sleepy Mt. Vesuvius standing silently behind the ruins, watching the city it engulfed, watching me and watching those flowers dance in the memory of those who lie frozen in time in Pompeii.

Pompeii is an ideal day trip from Rome or Naples. Travel time by road (without traffic – which is rare on these roads) is around 2.5 hours from Rome to Pompeii, 30 mins from Naples to Pompeii, 45 minutes from Sorrento to Pompeii.

It is best visited en route a trip to Amalfi from Rome, where one can stop for a couple of hours before proceeding onwards to Naples. 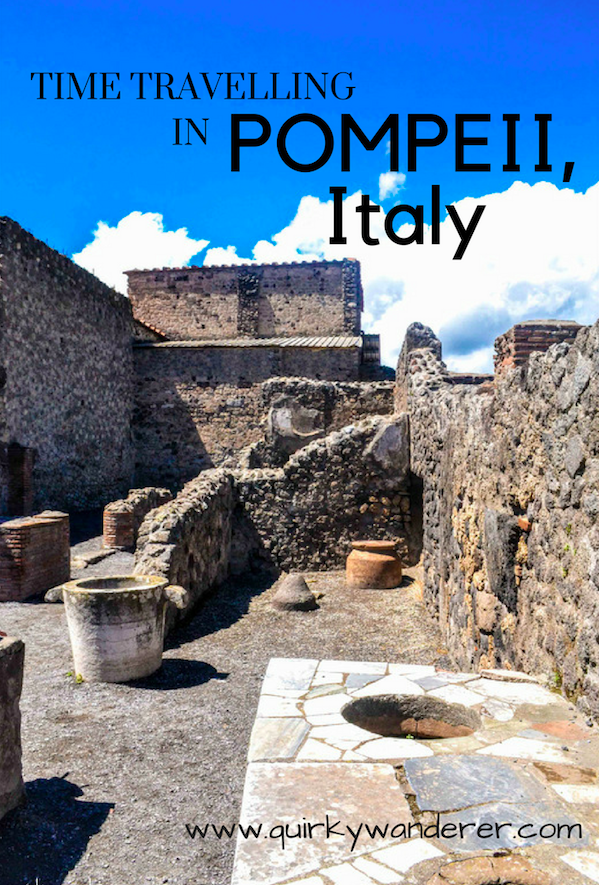