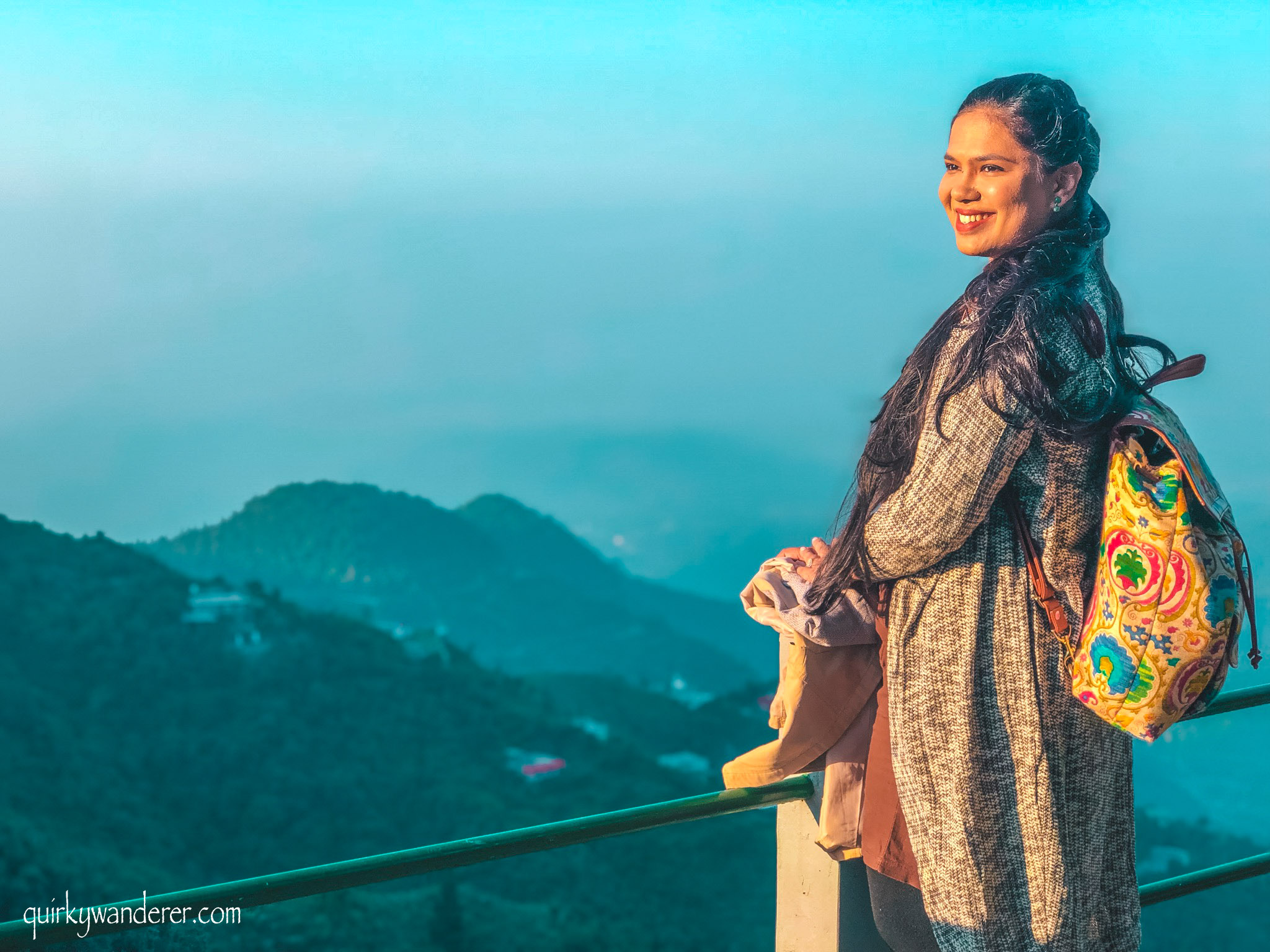 It is a normal day in the life of Susheela Ji. She walks down the narrow pathway, armed with gloves in her hands, ringing doorbells of homes, collecting waste, and scanning the QR code on her mobile to confirm the collection. She is part of the Hilldaari movement, kick-started by Nestle India, embraced by the citizens of Mussoorie, the popular hill station of Uttarakhand in Northern India.

Krishna Devi stands proudly in front of her mural on a wall, in the bustling market area of Mussoorie. She is another waste professional, who has gained recognition for her efforts through the Hilldaari movement. “Hum koode wale Nahi hai, hum safai wale hai. “ (We are not in charge of garbage, we are in charge of cleanliness.) she says, with an air of pride and confidence. She is a celebrity in her own right and the charcoal mural only validates it.

Hill station visits in India are synonymous with a piping hot bowl of Maggi. There is a Maggi point at every bend and on one such Maggi point, overlooking the valley, we see a glimpse of Upendraji’s creativity. Within seconds, Maggi packets are transformed into a robust rope.

In the background, Pyaare drives a van and collects Maggi packets from each Maggi point. While Upendra Ji demonstrates how waste is a resource, the Plastic Express gives a deeper insight into the number of stakeholders in the Hilldaari Movement, like different spokes of one big wheel.

The mountains are always calling. But this time, mountains in Mussoorie called me for a reason. The reason was Nestle India’s invite to know about and be inspired by the Hilldaari movement.

The Hilldaari movement is an initiative by Nestle India that brings together several stakeholders in hill towns for effective waste management: segregation, recycling, and using waste as a resource.

It is an integral sense of ownership that locals have for their town.  While I saw the project in full swing in Mussoorie, the Hilldaari movement has spread its wings to two other hill towns in Northern India: Dalhousie in Himachal Pradesh and Nainital in Uttarakhand. While the narrative remains the same across, the expression changes at each place.

The stakeholders: Collective sense of ownership

Hilldaari truly brings out the collectivism of several stakeholders of the project: right from the implementation partner – Stree Mukti Sanghantan, the technical partner – Recity, waste workers who climb down steep slopes to clean the trash to the local supervisors of KEEN ( Keeping the environment ecologically natural) who ferry the waste from homes to segregation centres, the Municipal Corporation, which also plays a major in enabling the Hilldaari movement power through.

Stakeholders also include the citizens, the local municipality, the hotel and restaurant owners, retailer associations who have come together to create this sustainable model that ensures both behavioral change (e.g.: the way we see waste as well as waste workers) as well as visible change. (e.g.: ensuring source segregation, zero waste institutions and lesser use of landfills).

The stakeholders in each town vary, but the integrity, the goal of building a resilient city, and the collective sense of ownership remain the same.

Normally in most Indian towns, portraits of celebrities or prominent people adorn the walls. But in Mussourie, as a part of the Hilldaari movement, waste workers gained recognition through Murals: DEEWARO PE DASTAK.

Walk in these bustling streets of Mussourie and you will find yourself face to face with huge charcoal portraits of Krishna Ji, Satpal, Deen Dayal, Dabloo, and others. Harshada Kerkar of MOG- Museum of Goa sketched seven such stunning portraits over a month. She interviewed the waste professionals (door to door collectors, workers who clean drains, sweepers, waste sorters), studied their day-to-day challenges, and sketched these as an ode to their work.

Neha Sasikumar of the Hilldari team shared interesting anecdotes. She said locals and shop keepers got curious when they saw these being painted, some thought these were spiritual gurus and paid respects. Recognition and gratitude are two things that stem from this initiative: Deewaro pe Dastak. Not all doors are tangible; some are intangible ones that make you want to knock on them.

Neha puts it brilliantly, “Deewaron pe dastak dete rahiye, in main darwaze ban jaayenge”. (Keep knocking on these walls, you will find doors in them). These Deeware (walls) are indeed Darwaze( doors) that knock into the minds of several who see these portraits and recognise the work of these local heroes!

COVID Impact on the Hilldaari movement and collective problem solving:

So did the Hilldaari movement pause when COVID struck?

No! And this is one of the biggest inspirations I have drawn from the movement.

While the world swung into uncertainty due to the pandemic, there were several unforeseen challenges that could cause significant hindrances for the stakeholders.

These challenges included the safety of the frontline waste professionals, adapting to newer ways of monitoring, including social distancing in the procedure, and finding a way to ensure seamless collection and sorting while keeping the movement restrictions in mind.

There were quick efforts made to safeguard the 284 waste professionals working at the frontline in all three locations: Mussoorie, Dalhousie, and Nainital.

Improved working conditions had to be ensured as the frontline workers were at risk. This was done by providing safety equipment, PPE’s, Uniforms, collection bags, and bringing safety SOPs in place. Food and sanitization kits were provided to these waster workers and their families. These were designed to provide for families of up to 4 members.

Recity adapted to a digital monitoring module to monitor the collection as well as provide incentives. These performance-based incentives are rolled out based on digital monitoring through the app. The app facilitates direct transfer of payments to the bank accounts of the waste workers thus making them feel empowered and help maintain social distancing as well.

The genesis of the Hilldaari movement was collective problem solving and COVID was another test to ‘collectively’ stand for and by each other. While all the stakeholders came together during the pandemic, the safety and security of the workers were paramount.

The communication shifted to WhatsApp, phone calls, radio jingles, and vehicles playing messages emphasizing the importance of social distancing. Online training sessions and capacity building sessions for workers were facilitated to adapt to the new normal.

Apart from dignity and respect, which Hilldaari already aimed at, waste worker professionalization is given importance in this period. The workers are provided with social security and this is enabled through formal identity cards that help them avail insurance schemes and other government schemes.

Another development in the pandemic was how the Hilldaari movement embraced the nation-wide sentiment of GO VOCAL FOR LOCAL. The walls of Dalhousie are used to creatively promote the local Chamba art, while the message of waste segregation is effectively conveyed through these paintings painted by Mr. Parikshit, a local artist from the region.

Waste is a resource:

I stand in front of the massive 150 feet wide, 12 feet wide, vibrant Wall of Hope in the village Bungalow ki Kandi, near Mussoorie. The citizens of Mussoorie with the help of Mr. Kerkar from the Museum of Goa build this colorful wall with over 1500 discarded plastic bottles.  One of the biggest behavioural changes brought by the Hilldaari movement is the way people perceive waste.

Upcycling waste and using it as a resource can be seen effectively in the Wall of Hope. Similar initiatives are taken in Dalhousie, where plastic is upcycled into benches, translating into visible change.

The narrative is the same, but the expression changes based not the tone of the city.

The Hilldaari movement aims at building sustainable, resilient cities by enabling various stakeholders to collectively come together and handle waste effectively and efficiently.

The pandemic has increasingly made us aware of the importance of sustainable systems and how waste management and hygiene cannot be taken for granted.

What I have learned as a traveller: What overwhelmed me in Mussoorie was the integrity of all the local stakeholders who came together with a vision of a better, more effective waste management system. Working in tandem, facing logistic challenges of hilly terrain and the sense of ownership was deeply inspiring for someone who values conscious travel and propagates leaving a place just like you found it.

What overwhelms me now is that even in this pandemic, the stakeholders in these three towns are relentlessly working, adapting to the new normal and ensuring that the goal of resilient cities is achieved, one day at a time.

I have learned a lot from each of these stakeholders:  From the drivers, the waste workers, the sorters, the facilitators, the village girls who told stories about the Wall of Hope: everyone is an inspiration.

But a special kudos goes to Nestle India, for not just nudging these citizens to rise to this cause, but also enabling them, helping them, being the “Hub” to the various “spokes”, giving the movement wings and letting the stakeholders take the flame ahead.

A special thank you to Tulika, Shashank, Neha, Meha, Arvind Ji, and the entire Hilldaari team for sparing time and patiently giving a glimpse into this deeply inspiring movement!

Disclaimer: I had visited Mussoorie on the invite of Nestle India in October 2019, and all the learnings, experiences, and inspirations drawn are my own!